2019 was an anxious, frozen by fear into inaction, “what IS my life?” year. It was getting by, but not really thriving in any way. I spent it with a lack of self-confidence, soft decisions, and being scared most of the time. If you’ve provided me any mental support or friendship, I thank you from the bottom of my heart. If you’ve made time for me, encouraged me in any form, you’re just the best and I appreciate it, even if it didn’t show, or, more likely, showed it too much. I’ve been occupied with worried and empty for so long that it seems like I’ve always felt this way and can’t remember anything else. To sum up: I watched all seven seasons of The Mentalist in the space of a few weeks around a low point near Thanksgiving. It wasn’t even good, there was just a lot of it and allowed me to indulge less in hypochondriacal and doomed thinking. I’m hopeful that with a little effort, 2020 will be much improved.

It’s hard to know what’s a chemical imbalance and what’s a natural response to the evils of surviving under capitalism; how much “fixing” yourself is putting yourself back together to be a cog in a machine. https://t.co/4KE1WJ1d9t pic.twitter.com/AvFDLYT2p6

I also wrote what seemed like over 100 letters to Nathan in New Zealand over 12 months.

Not to brag, but I’m able to compartmentalize and spend meaningful and upbeat time with Zoe.

The month started by raining for days on end, and Zoe ate some bad lettuce so she wasn’t feeling great. We watched “American Ninja Warrior” and did winter crafts, made miso soup, and planned for Christmas. We bought new rain boots and a winter coat, because its been in the high 40s some mornings (California freezing) and we like to go for Christmas light spotting walks at night and Zoe’s been going through a growth spurt, so a lot of things don’t fit anymore.

Here it seems like Zoe is interacting with a dog or cat through a fence, but it is a green ball that she hoped to throw over the fence, somehow, and save it. 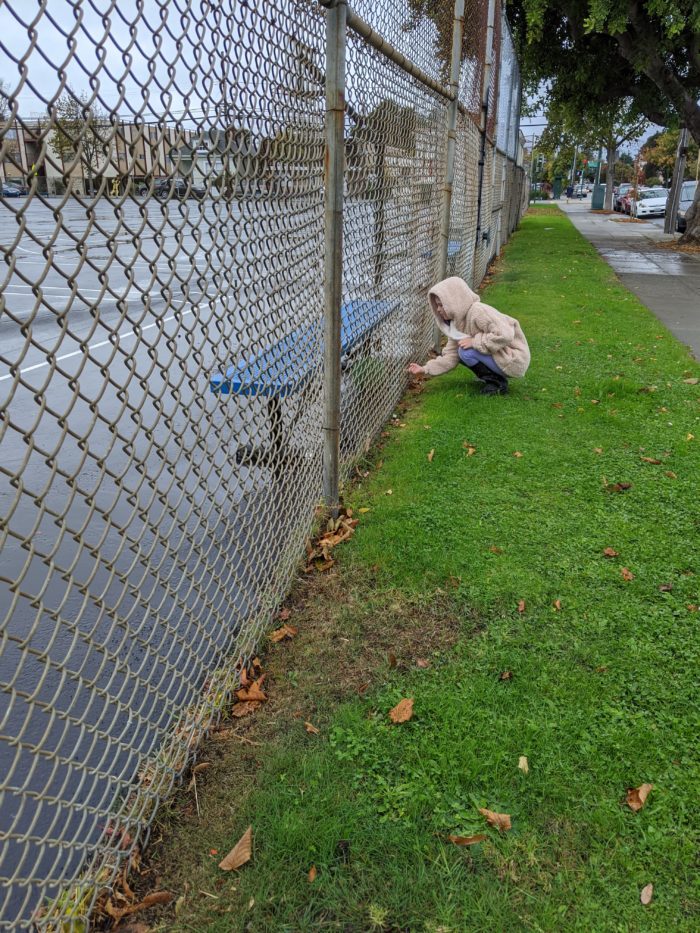 Ambrosia, seen here enjoying the good life, as we do sometimes. A bar that also serves Xolo? Sounds agreeable to me!

This proved to be much too difficult to put together. (Note: was 90% off when I bought it.)

I saw Angel Olsen, but despite me sitting very far away from the stage, we did not meet and fall in love.

Another “it’s expensive, but it’s the local nursery” trip for a Christmas tree. Then it didn’t fit in our tree stand, and I had to buy a new one, and I felt like a proper dad because I was irritated and grumpy on what should have been a joyful occasion.

We made felt ornaments, which I can’t believe we had never done before. Zoe made a Cheeto. I made my stuffed ghost Boo.

Zoe and Olive, and Ambrosia, who helped me with the new tree stand.

One of THREE holiday concerts Zoe performed in this season. She received a Santa hat at this performance, and wore it pretty regularly for the rest of the month.

Zoe & the beautiful tree. What a nice time to be outside, in the California winter.

Our trip to see Santa.

Oh, how grumpy this Santa gets when you take your own personal photos.

We’ve already talked about this mega-fry.

A trip to Color Me Mine to paint an Olive mug. Wow, that was a busy Sunday.

The bowling place near us rebranded itself, but it still doesn’t have candlepin bowling, which if it did, my life would be 8% to 12% better. I broke 100 which makes me think I should bowl more, but have you been bowling lately? It’s pretty expensive.

Zoe came to work with me the day before Christmas Eve Day, which is my most favorite day of the year. The corporate world is a little boring for her, so I bribed her with bagels and Frappuccinos. Have you bought a Frappuccino lately? They’re pretty expensive.

The Trader Joe’s gingerbread house is a joy to put together: it never collapses into itself, and thus we never have to throw it away in frustration.

On Christmas day, I went for a hike with Ovi and his family in the Oakland Hills. While Thanksgiving was bleak and cheerless, Christmas felt light and almost joyful.

We had a very putty heavy Christmas. The gift of the season was Crazy Aaron’s Thinking Putty.

We listen to a LOT of Taylor Swift, but even more, we listen to the same eight Kidz Bop songs. We also listened to a decent amount of new Aladdin soundtrack.

I had a little Mission of Burma resurgence and a big Polvo one. I got really into the Gulfer album after Spotify rightly thought would like them. If they release a new album soon, it could be one of my favorites. Had a passing appreciation of Tiny Moving Parts. Listened to a lot of Jetty Bones. The new La Dispute didn’t work for me, which took me a long time to come to terms with since Rooms of The House was one of my favorite records in the last few years. Scott let me know that most of the Thinking Fellers Union 282 catalog is on Spotify, if you search for them by name, not by TFUL282, which I had been doing for years.

I threw this boomerang into a tree two minutes after this photo was taken.

We were able to add onto our Q-BA-Maze collection thanks to Grandma & Grandpa. 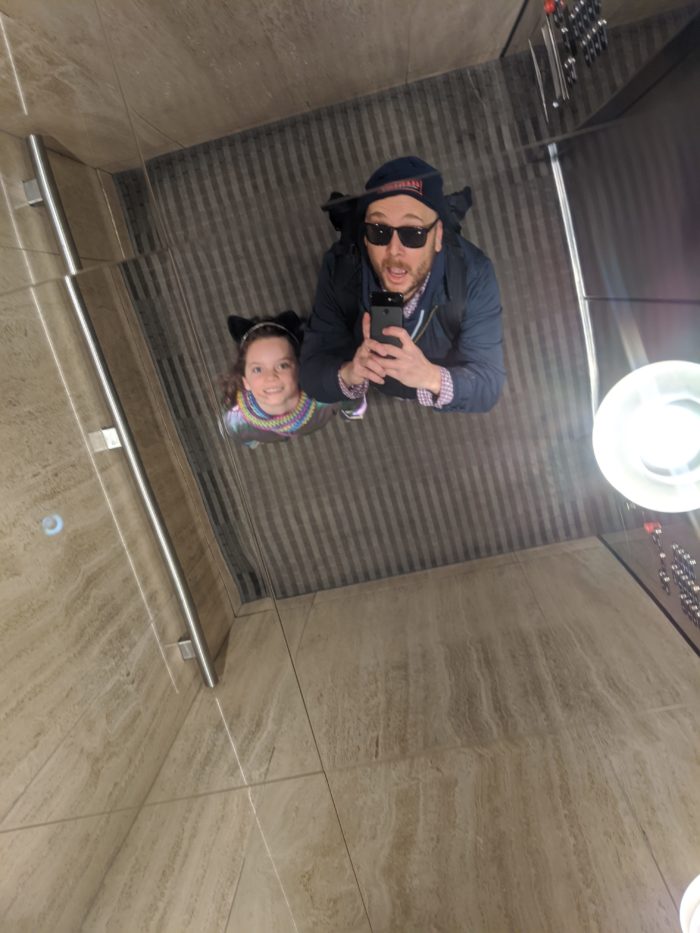 The Monday after Christmas is a traditionally quiet day work.

Quiet enough to get some tofu tacos and buy new calendars.

On New Year’s Eve, we went to the Oakland Zoo because James gifted us with a pass. I had wanted to see the zoo covered in lights for a while, and Zoe was super excited about the whole thing.

They had a snow machine.

We were able to ride the gondola at sunset. I hope this is what 2020 feels like (quiet & peaceful, beautiful, uplifting, etc.) 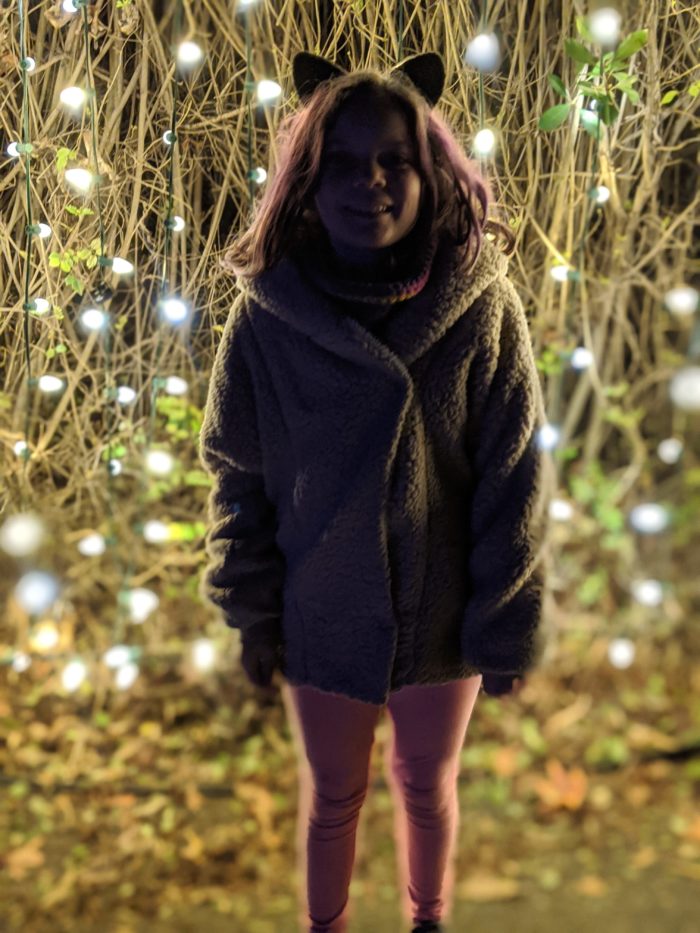 We spent the last part of 2019 finishing “Just Add Magic” and it was one of the better shows I’ve watched lately, and certainly the best show I’ve watched with Zoe. I liked everything about it. It had such an easygoing, relaxing pace and sprit about it, and Burly from Mouse Rat plays the relatable dad. I feel like this show is going to aptly prepare Zoe for the Buffy series. I do wish that the spinoff wasn’t about magic in Bay City, but instead magic in the Wild West of 1875, which the show sort of teased us with at the end of season two, part 2:

(Chuck, having returned to his appropriate time, offers his help to his friends.) 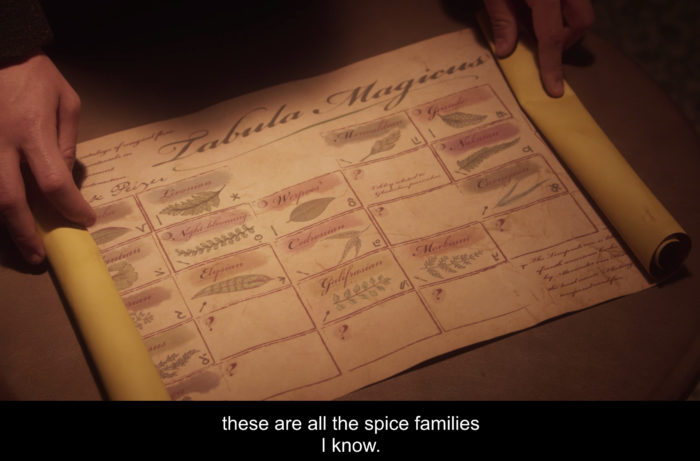 (Chuck has really good penmanship. He researched and made this amazing chart about magic spices which I would gladly purchase for my home.) 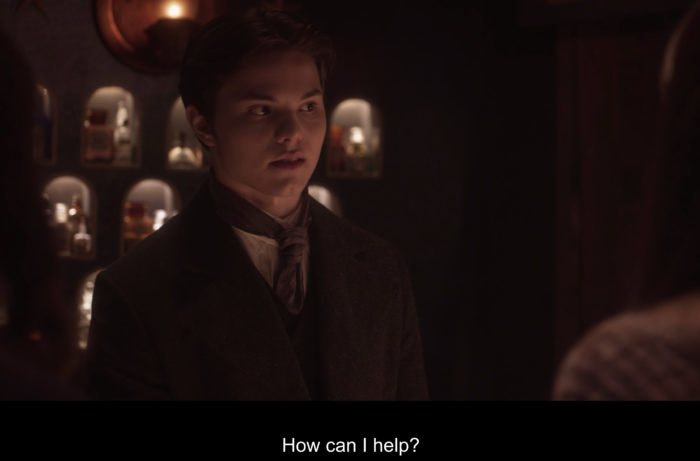 (Again, because Chuck is now a friend, he is quick to offer his help. Old Timey Chuck works as a hero for me.)

As to be expected, the Amazon series is way different from the book to the degree the credits should say “Inspired by the book…” I’m already missing Mama P and the quaint Saffron Falls, and Jake-ritos.

Zoe partied until midnight, staying way up past me. She did promise to wake me up when it was 2020, and she did, and I wasn’t grumpy.

Zoe bought a stuffed elephant from the zoo with her bracelet profits. We went to take our traditional photo at the poop trash can at the dog park and we (mostly myself) were distressed to find that it had been removed, or painted over. 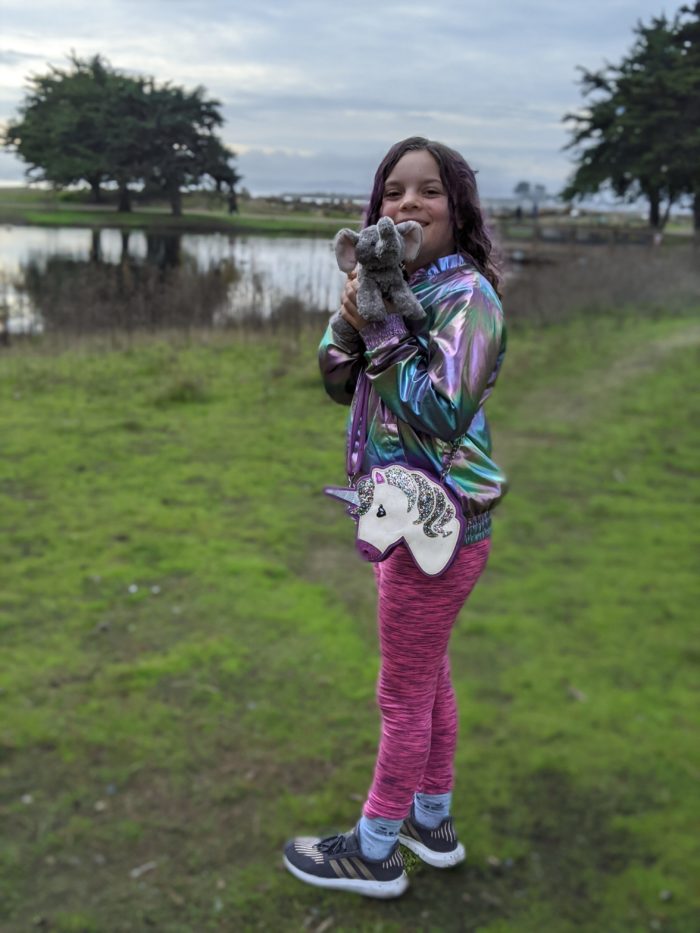