In 2004, during The Dark Times, my super friend Nathan was shortly enamored with the show Smallville. I thought it was cool that a sexy bald man was given a starring role on a teen drama. Nathan recorded an episode for me since I didn’t have a TV or cable and mostly just watched The West Wing on DVD and wondered why I was so unemployable. Long story short: I really liked a Burger King spot that appeared during the first commercial break.

The scene: a typical office at lunch time. A group of men in shirts and ties are sitting or standing while one man holds a Burger King bag. The man calls the name of each sandwich and throws it to the person who acknowledges it as their order.

Man 1: Yep. (Catches sandwich and then pauses. He is immediately quiet and introspective.) That is me: tender on the inside, crispy on the outside.

Man 1: That’s the crispy side.

Man 1: (Points to heart) Locked up in here, away from you guys.

(Scoffing laughter from everyone)

Man 1: (Somewhat manically) Is that funny? (Holds thumb and forefinger very closely.) Because I’m this close to going crispy.

Wow. This commercial addresses so much about the battle between the external and the internal presentation, protecting your feelings and emotions, coming to terms with a popular, if somewhat false, group opinion and eating chicken. Although I don’t like that the sandwich contains extra mayo, I can relate to this man played by the man who would later come into my house every week and say funny things about stuff on tv. I believe that he is struggling every day to do what is right. 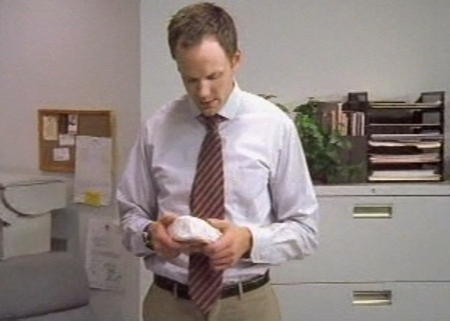 Moment of self-realization: “That is me.” 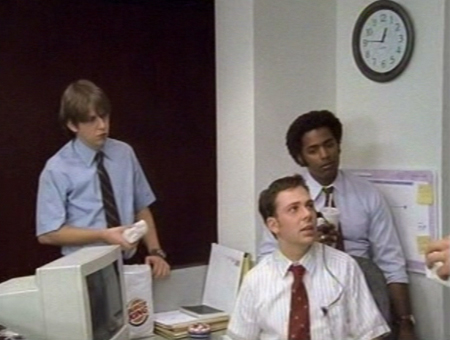 Locked up in here, away from you guys.

I’m this close to going crispy.