I was at Nate’s last night and I urgently needed to know the name of the game they played at The Enfield Tennis Academy (obviously, it was Eschaton). A quick Google search showed what I hoped was a joke I didn’t get, a typo, or a reviewer getting one of his stories confused with the real world. But it wasn’t any of those things.

DFW‘s writing always made me remark to myself “Yes…that IS how you perfectly describe that abstract concept/emotion/episode of M*A*S*H,” etc. I’m cry-in-the-bathroom at work sad that things had became so bad for you this summer and that the sadness of your novels and articles wasn’t some artifice or, as I hoped, a really good imagination. I don’t know where to being thanking you, though. Thank you for introducing me to the Incandenza family, first of all. When I was new to California and friendless, the gang of IJ kept me company on numerous evenings and made me feel less lonely. I liked that he/you (I should just direct this to you, but it feels a little weird, so I’m not going to stick to any real subject, you or I) normally wrote “supper/suppertime” instead of the less quaint “dinner/dinnertime.” It’s the big and little things you did, like using a footnote that contained only “!” What I probably admired most about his writing, and I know I’m going to get trapped in my own awkward words here as they come out in a jumble, was his ability to make you feel like he was your more well-spoken interior voice. For instance, and like everyone I think, I’m afraid of open bodies of water. In his Shipping Out piece, he is able to include that fact, but also write a paragraph that makes you want to go back and reread the chapter of Moby Dick you barely remember, and even that Stephen Crane story you hadn’t thought of since 7th grade. I think I’m trying to make the point that he could be funny and extremely relateable but also inspire me to revisit articles or stories or books or even emotions with a slightly new point of view. He even made watching tennis seem interesting. Now, some two weeks after I wrote most of this, it just seems absurd that he’s gone. In that time I’ve bought new shoes and done stuff at work that seemed completely useless, watched TV, drank wine, and reread some of my favorite DFW pieces and struggled with some stores I hadn’t read. I wonder if he would have liked the sad beautiful loser music of The National. I wish he wasn’t terrified in the final days, as I read in Salon, but that wish sounds stupid, but it still breaks my heart. 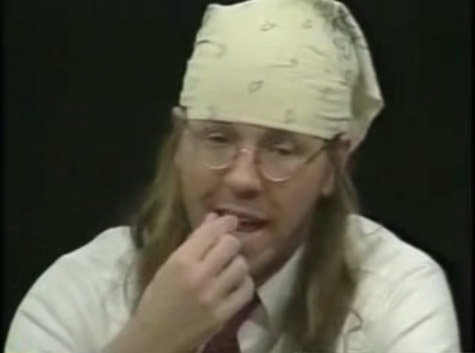 [above: on Charlie Rose, speaking about Wild At Heart: “William Defoe is in that…with black stumps for teeth.”]

It’s me being soul-crushingly selfish when I’m sad that there will never be new DFW material in Harpers or The Atlantic [response] [inspired counter-response] [and again, via my friend who could not blog], magazines I recently subscribed to after reading his piece in The New Kings of Nonfiction (and getting the two magazines confused). 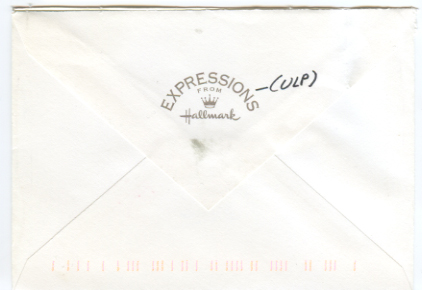 [Above: in 1998, it was necessary for me to send Mr. Wallace a copy of the Forced Exposure Chris Knox interview because it used extensive footnotes, along with and a Guided By Voices mix tape, because, at that moment in time, they were the greatest band in the world. He was gracious enough to send a thank you note, and did not even hint at throwing away the package in its entirety.]

[above: DFW responds to a postcard asking if he’s written anything new, circa 1998, and then shines a light on Richard Powers. I’m fairly sure I didn’t save the entire postcard containing my question because I asked something about Hal’s toothbrush or maybe about something about a scene with a reflection in some mirror at Enfield, and he wrote “huh?” or “eh?” or something that made me cringe every time I reread it.]

I suppose this can all be summed up with: “159 782-785 YDAU Mario tells Hal that he seems sad.” And Mr. Wallace sweat when he talked. Just like me. Unlike me: he must have been a monster at Scrabble.

I realize I have nothing original or enlightening to say about his writing, nor did I ever get to meet him and regret being too lazy to ever go to a reading, but just being able to put something down about this whole heart-breaking deal is a step above my normal writing style, which consists of scanning or photographing sandwiches.

Some notes to myself. “As usual, though, there’s much more to know than most of us care about—it’s all a matter of what your interests are.” [from Consider the Lobster]

But oh! In the weeks since I first wrote the above and collected article that I would want to reread, and finally felt like it was “ok” to read him again…I was hit by how screamingly funny he could be. Or how he could find humor in the most unfunny of places (a boring chain hotel room, for instance). His writing always came at a subject from sideways (or straight above, I can’t decide. Probably both.) so of course he would be amused at the absurd or the terrifying or the hollow or fake. And he was able to make me, or you, the reader, as equally amused, or sad, or gleeful or terrified.

Also, I wish the tech crew he hung out with in 2000, on the McCain campaign trail, would write something about him.

So: sometimes the only thing you can do — when the unbelievable truth about the finality of death hits you in the face like a dirty pigeon flying at you when you are riding your bike — is to look at a photo taken earlier in the day of your friends at a memorial service eating gazpacho.