December is here and I write very slowly and lazily and there doesn’t always seem to be a reason to share these private family moments, but then there seems to be every reason to document it for myself, in this ultra-public way. Also, the alternative is to keep a photo album, and that’s like telling me to build a submarine in my spare time.

Scott’s parents came to visit, which was very fun because they are very fun folks. They have been looking forward to meeting Zoe, who was, at that moment, spending a little time with Grandma in Arizona while Nicole was working in Mexico City. It was also historic because it was the second or third time in my life that I was in a sports bar to watch The Big Game, though this place was so much more because they had a bean burger on the menu. A bean burger! (It wasn’t bad. More below.)

There was also random sitting.

We went apple picking which is always on the hottest day of the year, never on the coziest or chilliest of days.

I already mentioned the bean burger I had, but if I had to rank all of the veggie burgers consumed in October, it would have to go, from best to ok-ish as:

We decided to drive from Oakland to 29 Palms (@500 miles; I always follow the Modest Mouse rule, so this was going to be no problem).

We made it to Fairfax or Carlsbad or someplace four or five hours away and stopped at some huge fun pizza and game place. Through sheer skill (!) Nicole won Zoe a little dinosaur.

The rest of the ride was uneventful, except for listening to a three cd set of children’s songs over and over. But oh, was it worth it to drive up and see Nicole and Blaine after far too long. And Sara! And Mr. Nick! And Nicole’s sister and brother and everybody and everybody! It was just the best place I could be in at that moment in time: modern concrete chic with a touch of the terrifying, cruel outdoors. Zoe soon found a place amongst the axes and fire pits and bridges and carved out her own territory.

Cactus coffee with our pals at the relaxed paced stoner cafe (my wrap was delicious). 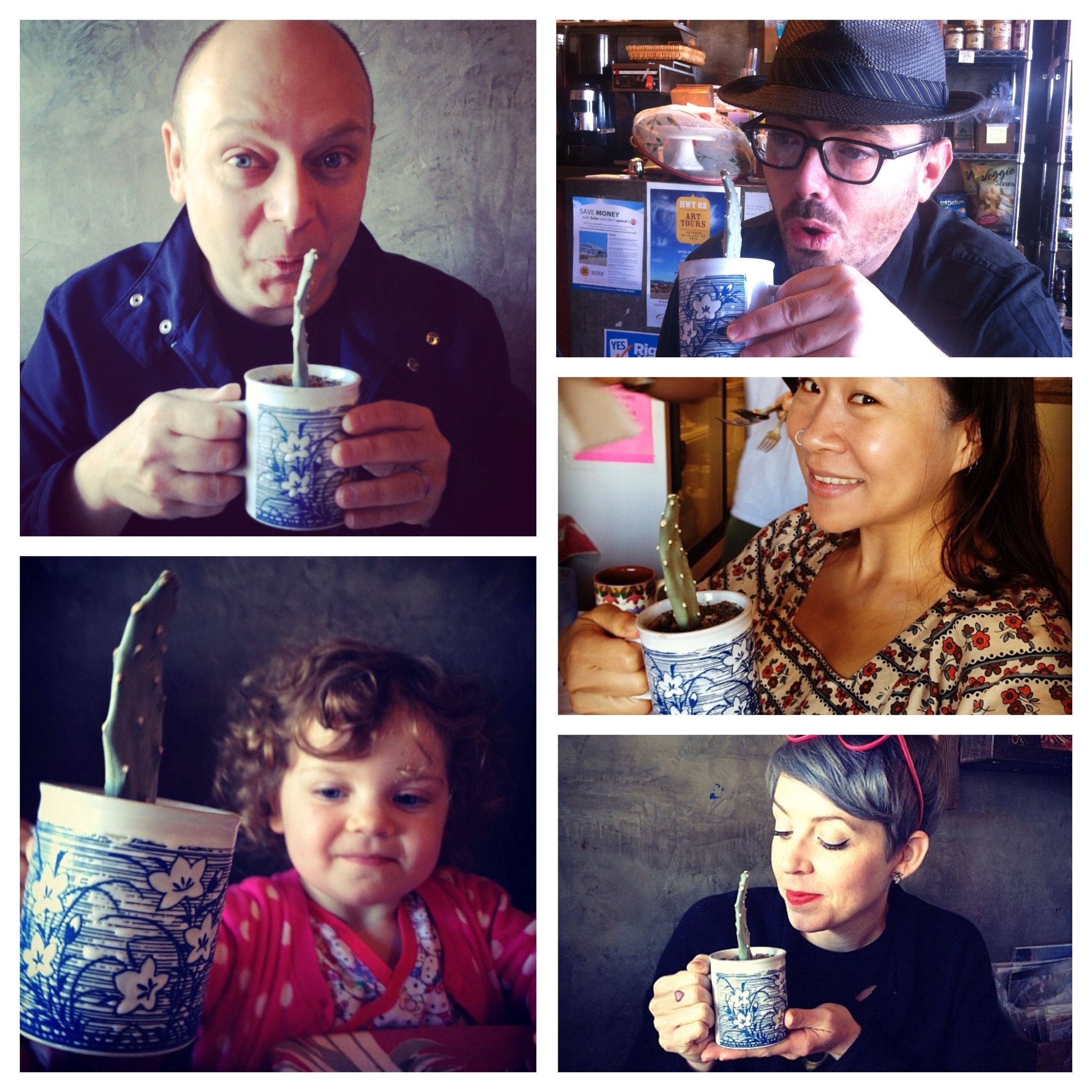 Time to kill before I had to attempt to tie a bow tie. 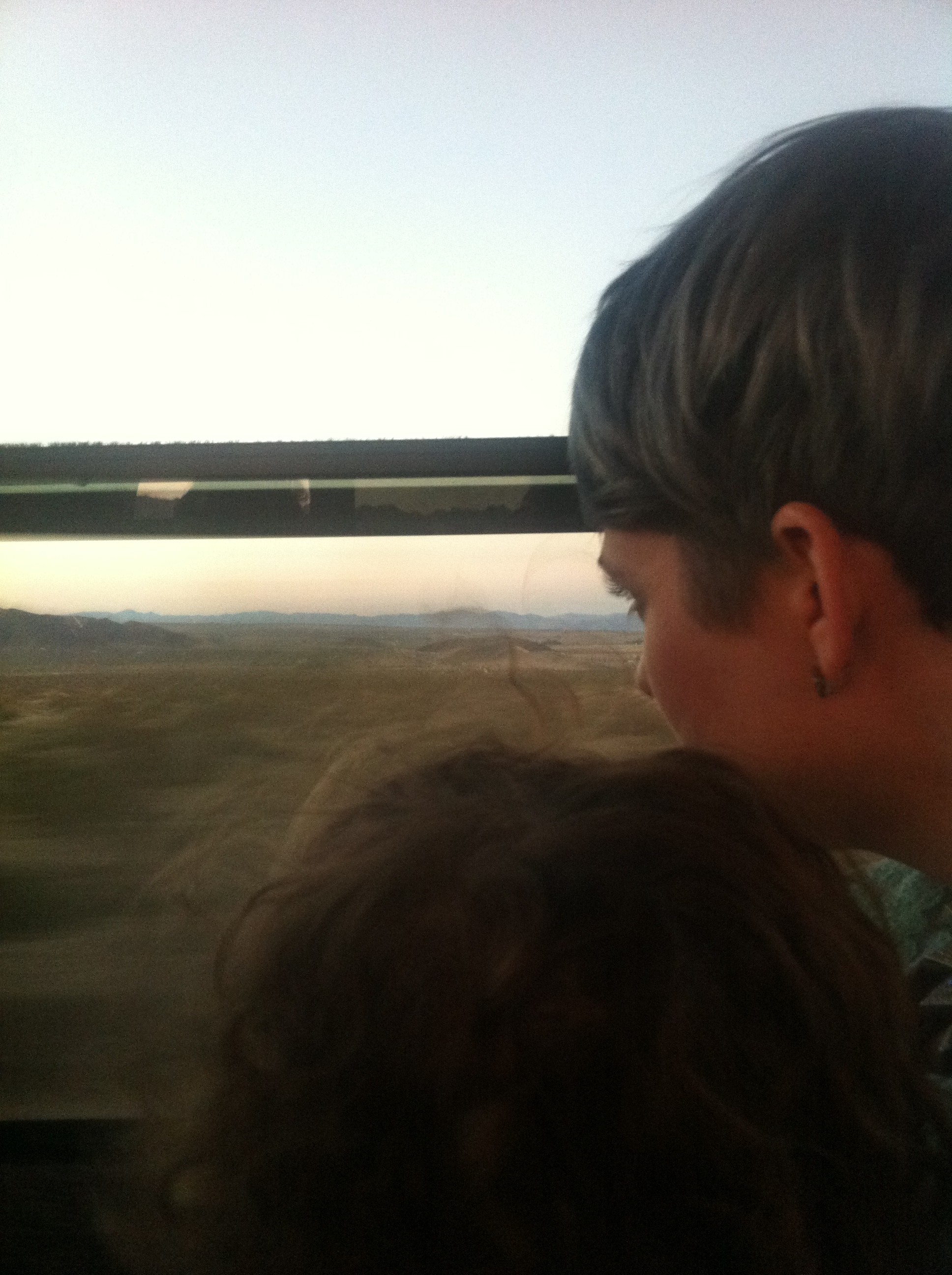 Our country, in case you didn’t know, or drive pretty much the length of most of it the day before, is vast and wondrous.

The wedding was, like everything Nicole and co. attempts, amazing. I think I’ve known Nicole since she was 14 and I had hair. I’ve been a very big fan of her and every year or so she masters a new craft. I don’t mean “master” like she pursues it has a hobby, I mean she does that “10,000 hours to become an expert” thing in less than twelve months. I don’t want to do the math to see if that is a compliment or not, but she’s a genius and I’m proud to call her one of my oldest friends.

Moments like this make my heart feel full of love and life. I also got a ride from point A to point B with Scott and we listened to the Minutemen and he pretended that we were getting pulled over, which seemed like the funniest thing.

Part Two will come later, entitled: “You can go home again, but everything is a Target now.”